Bitcoin is not easy to fully comprehend and often appears to be misunderstood. As many proponents see it as an opportunity to “get-rich-quick”, many detractors call it a Ponzi scheme. Some zealots will say “Bitcoin fixes this” to seemingly any problem that arises. None of these are correct, yet each holds part of the truth—so what does Bitcoin do, actually? To properly discover its applications, it is helpful to first understand why Bitcoin was created, and the technological innovation it utilizes: blockchain.

Bitcoin’s founder, pseudonymously known as Satoshi Nakamoto, lost faith in the traditional banking system during the Global Financial Crisis of 2008. In response, Nakamoto developed a peer-to-peer way of transferring value without relying on a bank or other financial institution to shepherd and verify the transaction, as seen in traditional finance. The bank, according to Nakamoto, represents a single point of failure as the lone authenticator in transactions. The challenge with removing banks as a trusted third party: how can a system without oversight ensure that someone cannot spend money that they do not have?

How does mathematical scarcity work?

Think of Bitcoin as a complex mathematical equation that can be solved exactly 21 million possible ways. Powerful computers called miners are managed independently across the globe. These miners expend energy to find new solutions to the “Bitcoin equation”. Every time a computer finds a new solution, that represents a newly “mined” Bitcoin. The new Bitcoin serves as the reward for the individuals running the miners. As time goes on, the reward for finding each solution diminishes, and therefore the rate of newly mined Bitcoin decelerates. Nevertheless, the 21 millionth Bitcoin will eventually be mined, and that will be the last. At the time of this publication, 19 million Bitcoin have been mined, with the final Bitcoin expected to be mined about 120 years from now.

What is decentralized transaction verification?

Bitcoin transactions are grouped together into blocks that are encrypted using a unique digital signature, or “hash”. To begin the next block of transactions, the hash of the preceding block must be connected, and then a new hash is created to append to the subsequent block. This type of protocol is appropriately named “blockchain”. With blockchain, rather than a single bank verifying a transaction (such as with debit card purchases), the vast independent computing network of miners verifies each Bitcoin transaction and adds them to the public, secure ledger (this process is illustrated below). The result is a digital decentralized ledger of transactions, secured by cryptography. 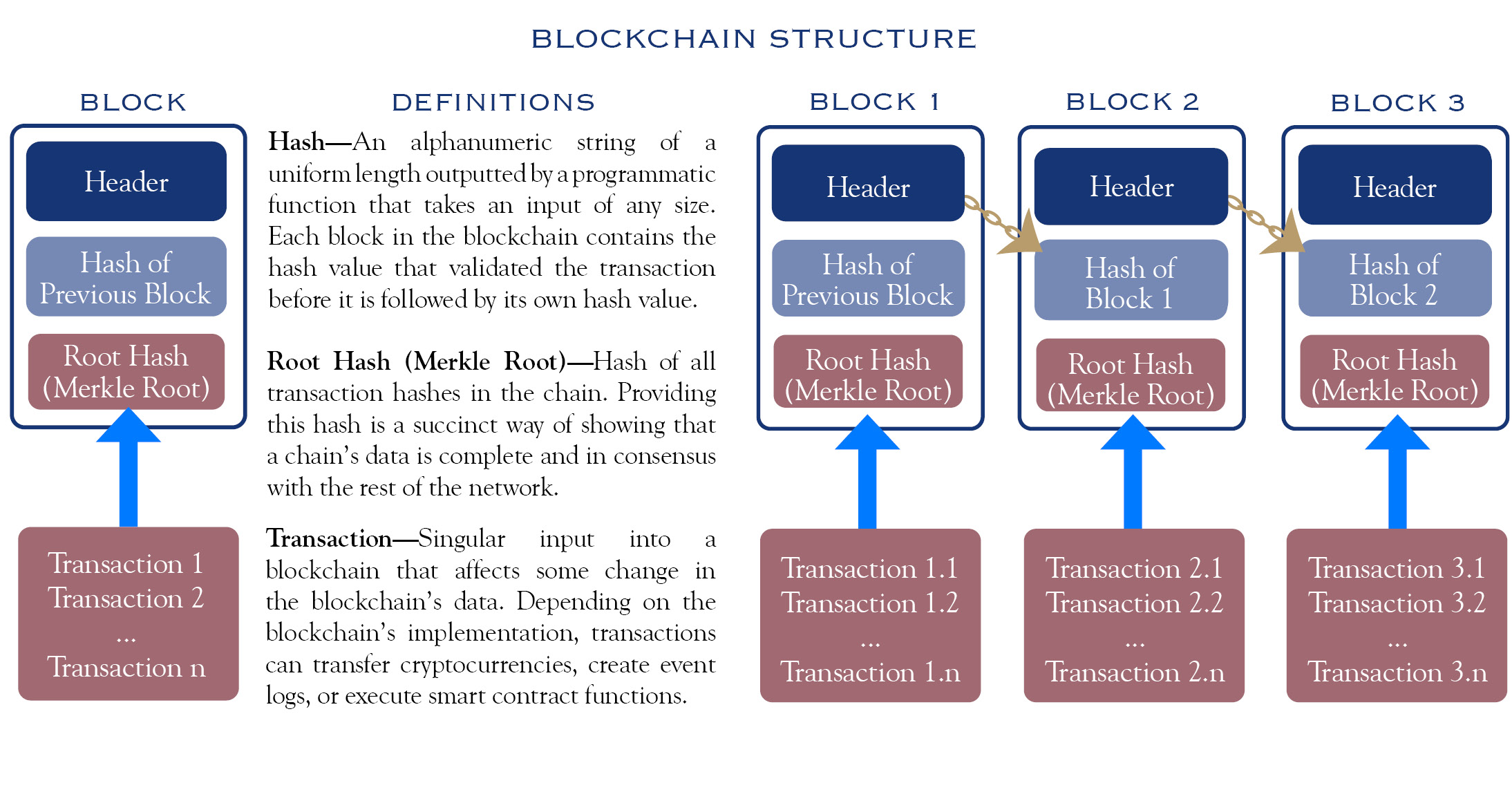 In a world where fiat currencies are printed by central authorities to the tune of trillions of USD/EUR/YEN, Bitcoin operates using a deflationary monetary policy, where total supply is known and new bitcoin are brought into circulation at a diminishing rate. Because of this predetermination, Bitcoin is an asset that cannot be inflated away with the click of a button. Given its monetary properties, it can be seen as gold for the digital age. However, it differs from gold in several important ways. The first is that gold’s supply, while limited, is not fixed—as the price of gold increases so does the circulating supply, as gold miners are more incentivized to bring it out of the ground. Secondly, transporting gold is quite cumbersome, especially in larger amounts, and carries with it substantial security risks. Lastly, gold is difficult to divide into smaller units. Bitcoin, on the other hand, 1) has a defined and limited supply, 2) can be transported quite freely via the internet, and 3) can be divided into one hundred million equal units (known as “Satoshis” as a nod to its founder).

Like the internet in the 1990s and early 2000s, Bitcoin and blockchain protocol are emerging technologies with applications that are still evolving, and potential that is hard to define. The internet transformed from its birth as a message board to the invaluable tool we use today. In 1995, the concept of Netflix or Uber likely would have faced investor skepticism. Bitcoin started first as peer-to-peer cash, and in its first decade of existence is potentially morphing into hard money as a longer-term store of value. As Bitcoin is still in its infancy, it is subject to massive volatility as adoption grows.

As portfolio managers, we continue to explore whether Bitcoin has a constructive role in portfolios. Should an investor determine Bitcoin has a role in their portfolios; they should be respectful of its volatility, sizing their positions and time horizons accordingly. Steady hands are required to enjoy the benefits Bitcoin may provide in portfolios without succumbing to short-term price movements. Over time, Bitcoin’s volatility has decreased substantially, and we expect this trend to continue, which should be an added benefit to portfolios.

Looking past the explosive hype surrounding Bitcoin’s price action, it is worth remembering the significant technological innovation behind it. Decentralized transaction verification and mathematically-enforced scarcity are important steps forward for digital assets. Should Bitcoin adoption continue in the same manner as seen with the internet, we may see a significant inflection point in the evolution of the internet and its intersection with stores of wealth. For now, we will wait and see.

For those interested in learning more about Bitcoin, we encourage you to read The Bitcoin Standard: The Decentralized Alternative to Central Banking, by Saifedean Ammous as well as the white paper, Bitcoin: A Peer-to-Peer Electronic Cash System, by Satoshi Nakamoto.