Are we there yet?

Frequent travelers recognize certain sounds that indicate the end of a journey is near—the drop of the landing gear, the warning to exit the moving walkway in the airport, and the announcement of the local subway stop. The inflationary journey has been a long and strange trip, and as it comes to an end, the sounds can be heard all around.

The Consumer Price Index (CPI) is used to measure inflation and metrics are typically reported on a year-over-year (YOY) basis. For example, in November 2022, unleaded gasoline cost $3.47 compared to $3.39 in November 2021—resulting in a 2.4% YOY change¹.

Similar to the time that price increases took to filter through to CPI, there will be a delay before the recent easing of prices is fully reflected. Nonetheless, the trends are improving. The swift downward pricing pressure in many previously constrained areas of the economy signals that inflation is fading. 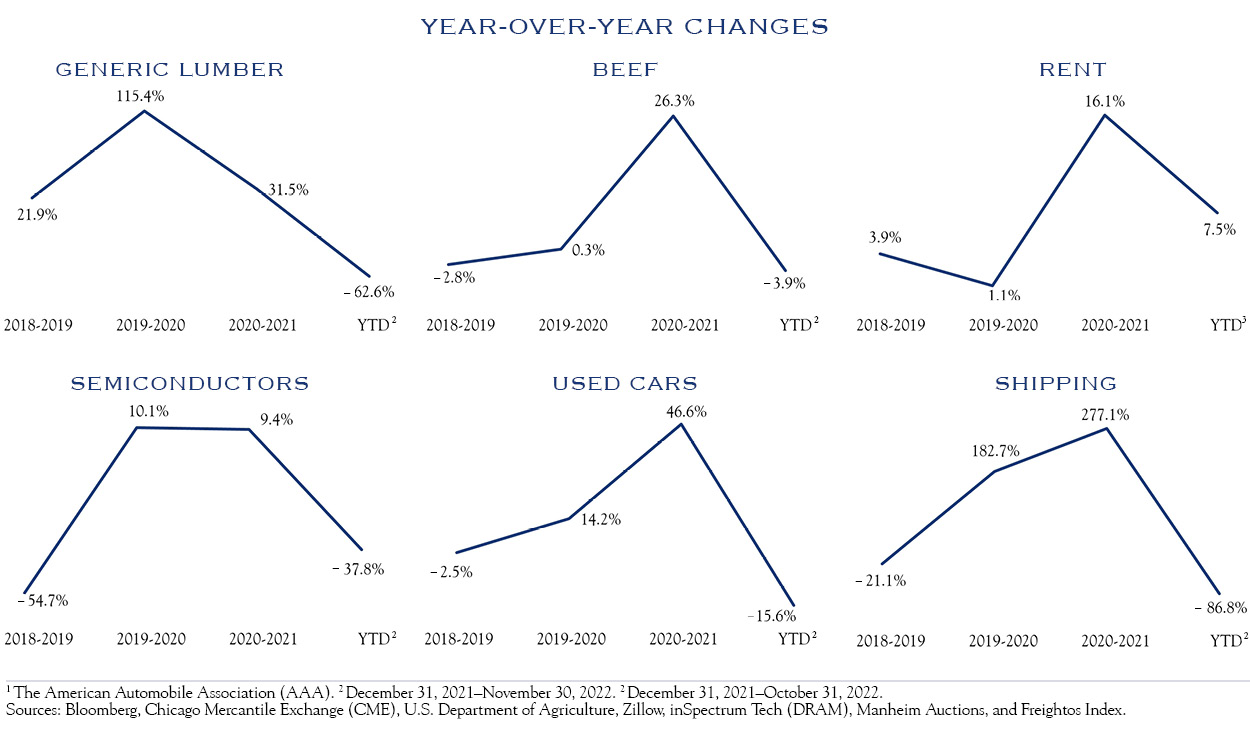 It is becoming increasingly apparent that price pressures are easing with each of these data releases. Considering that much of the decline in stocks in 2022 can be attributed to persistent inflation and the resultant higher interest rates, easing inflationary conditions ought to improve the investing backdrop.

For about a year, price increases have spurred the Federal Reserve to consistently deliver policy actions with an aggressive dialogue designed to tighten financial conditions via higher interest rates. The desired effect of more restrictive interest rate policies is most readily discernible in housing. For example, in 2019, a $500 monthly payment was required to purchase an average-priced home in Akron, Ohio. That number recently surged to $1,000. Homes are more costly, which has led to slowing activity in the sector and the beginning of a moderation of prices.

The Fed has made it clear that its dual mandate of price stability and full employment would, at least temporarily, become a single mandate focused on curing inflation. In doing so, the Fed has steadily raised the Fed Funds Rate bringing this critical figure to 4.0%.

Historically, interest rates ranging from 3.5-4.5% corresponded with P/Es between 17.0-20.6x. Higher rates clearly hurt stock valuations, but high valuations have coincided with rates even higher than seen today, so rates aren’t the entire story. A portion of the decline in valuations is attributed to a fed-induced fear that things could get worse before they get better. An easing of inflation and a less aggressive Fed posture should prove beneficial in months and quarters ahead.

Fed Chair Jerome Powell’s presentation on November 30th at the Brookings Institute provided some relief to valuations, primarily due to his milquetoast comments—a marked departure from his prior, Volcker-esque remarks.

Fed talk manifests in several metrics, notably the expected interest rate curve and indices of financial conditions. An eventual end to rate hikes should provide some much-needed tailwinds for the market. The market rally in recent weeks has coincided with anticipation that future rates will improve as the peak expected rate in October declined from 5.1% to 4.9%. Similarly, the Goldman Sachs Financial Conditions Index revealed less restrictive conditions moving to 99.9 after it was nearly 101 in October. For much of this year, either of these movements would have resulted in increasingly contentious remarks from the Fed to push back on any easing of financial conditions. That has not yet materialized, nor was it present in Powell’s comments. This indicates an increasing tolerance for a less restrictive Fed posture, consistent with improvements in inflationary readings.

While the primary investment focus of the moment is inflation, several significant developments have been unfolding, triggered by the three C’s: COVID, China, and Chips.

The COVID pandemic exposed the need for the U.S. to strengthen critical supply chains by creating geographically-diverse product sources and adding manufacturing jobs. From October 2021 to October 2022 456,000 domestic manufacturing jobs were made, and this trend is likely to persist, albeit at a slower pace.

With its factory shutdowns, sizeable protests, and other prickly political issues, China’s instability is inadvertently pushing the U.S. to create extensive backup and partial-replacement supply sources, domestically and in Mexico.

Chips look to be another source of U.S. job growth in coming years, driven by the need to reduce domestic reliance on the preponderance of semiconductors produced outside the U.S., in Taiwan, Japan, China, and South Korea. Bolstered by the recent CHIPS act, Micron Technology Inc., Intel Corp., Taiwan Semiconductor Manufacturing Co., and other major semiconductor suppliers have long-range plans to create U.S.-based semiconductor fabrication plants (fabs) that should add significant domestic capacity by 2025.

Another byproduct of the past few years has been an increased focus on productivity as companies seek to maintain profit margins despite challenging conditions. This focus has fed into rising investments in Artificial Intelligence (AI). The November 9th newsletter, The Batch, from leading AI specialist Andrew Ng discussed a few crucial observations on the development of AI in business. Ng notes that “machine learning continues to expand in mainstream businesses”. AI is relatively new, and 77% of companies began using machine learning techniques only in the past two years. He also notes that “many industries are still figuring out how to get the most out of AI.” It is early days in the migration of data analytics, machine learning, and artificial intelligence to business applications.

On a more simple note, in this letter, we’ve included one sentence of AI-generated text. Numerous tools now exist for taking a short block of text or descriptive title and having AI generate several written paragraphs. The results are sometimes amusing but generally reasonably impressive. Similar advancements are taking place with AI-generated art, raising the question: is it art or artificial?

To learn which sentence in this letter was generated by AI, refer to the footnote below.

Over the next few quarters, we expect growth to downshift as higher interest rates begin to cut into activity—particularly in housing and related sectors. We expect the job market to remain steady, and consumer spending to continue, driven by wage gains, stable employment, easing inflation, and remaining pent-up savings from the pandemic years. The continued shift from consumption of goods to services, lingering supply chain issues, and other pandemic hangover effects will make margins challenging. While we expect earnings to grow next year, albeit at a very modest positive rate, outcomes will be mixed, and much depends on the exact timing of the interest rate cycle. We do expect easing inflation and stabilization of Fed policy to benefit valuations. Thus, for investors with a multi-year time horizon, mid to high single-digit gains in equities are achievable. With interest rates nearing a peak, bonds also have an outlook that is more favorable than the past year though similar patience is required. Overall, we expect conditions to normalize in coming quarters, back to an era of slower growth, modest inflation, and stable interest rates.

This sentence was generated by AI with a short prompt and using a free tool available via NeuroFlash: “An eventual end to rate hikes should provide some much-needed tailwinds for the market. ”