Despite stocks posting all-time highs and bonds having largely shrugged off inflation concerns, concerns abound among investors. Surveys note fear over an increase in the COVID Delta variant, sticky inflation, high levels of government debt and spending, a sluggish recovery in employment, and so on. Yet, if we face and examine these fears, we find that they are not so scary after all.

COVID remains in the headlines with newly increasing case numbers, albeit off a very low base. Since the problem is mostly confined to the unvaccinated, if cases continue to rise, federal and local governments likely will respond by emphasizing the importance of vaccines, rather than pushing for renewed lockdowns. The U.K. and Singapore governments have made statements consistent with that approach. If followed, the negative effects on economic activity should remain relatively minor, particularly in countries, like the U.S., with high vaccination rates.

Inflation just reached a level of 5.4%, the highest since 2008—a noteworthy time where history suggests one major driver of current elevated readings. During an economic contraction, slowed activity yields less production, laid-off workers, and idled plants. When recovery begins, that process must be reversed. Due to massive stimulus in this COVID-driven cycle, spending power for consumers remained largely intact, allowing demand to recover quickly, outpacing supply. Some of that stimulus will fade in the fall, prompting the economy to work through logistical and supply chain issues. As an example of a disrupted metric, increased prices in used vehicles accounted for more than one-third of the overall rise in the Consumer Price Index (CPI). Our evaluation remains focused on whether inflation is spiking, spreading, and sticking around. Although there are some narrow pockets of price spikes (such as used cars), inflation does not seem to be spreading, and we don’t think it will stick around much longer. We anticipate elevated, though lower, inflation levels to linger for the coming quarters and return closer to the Fed’s 2.00% target level by the end of 2022.

Gauging the timeline on inflation readings is an inexact science; however, we gain some context by examining inflation before, during, and after the Global Financial Crisis. At that time, inflation climbed roughly one year leading into the crisis, followed by drops in prices for about one year. It took approximately six months to recover from deflation and then we withstood twelve or so individual months of inflated rates over two and half years. In the COVID crisis, the first phase of deflation and recovery was quick, lasting about one year, and it would be reasonable to expect about one year of continued disruption in pricing trends. That timeline is consistent with consensus expectations for rates to be nearing peak levels now and returning to normal levels by the middle of next year. In recent quarters, the money supply has increased significantly, and while it has not yet led to inflation pressures, it bears close monitoring as the economy re-opens and supply issues are resolved.

The chart below shows prices for three commodities: oil, copper, and lumber. Each has risen in recent months, owing to a rebound in economic activity. Only lumber prices solidly exceeded highs from prior cycles, though they have come down dramatically in recent weeks. We expect this trend of production problem solving to help the supply side of the equation across the economy, leading to a moderation in prices. 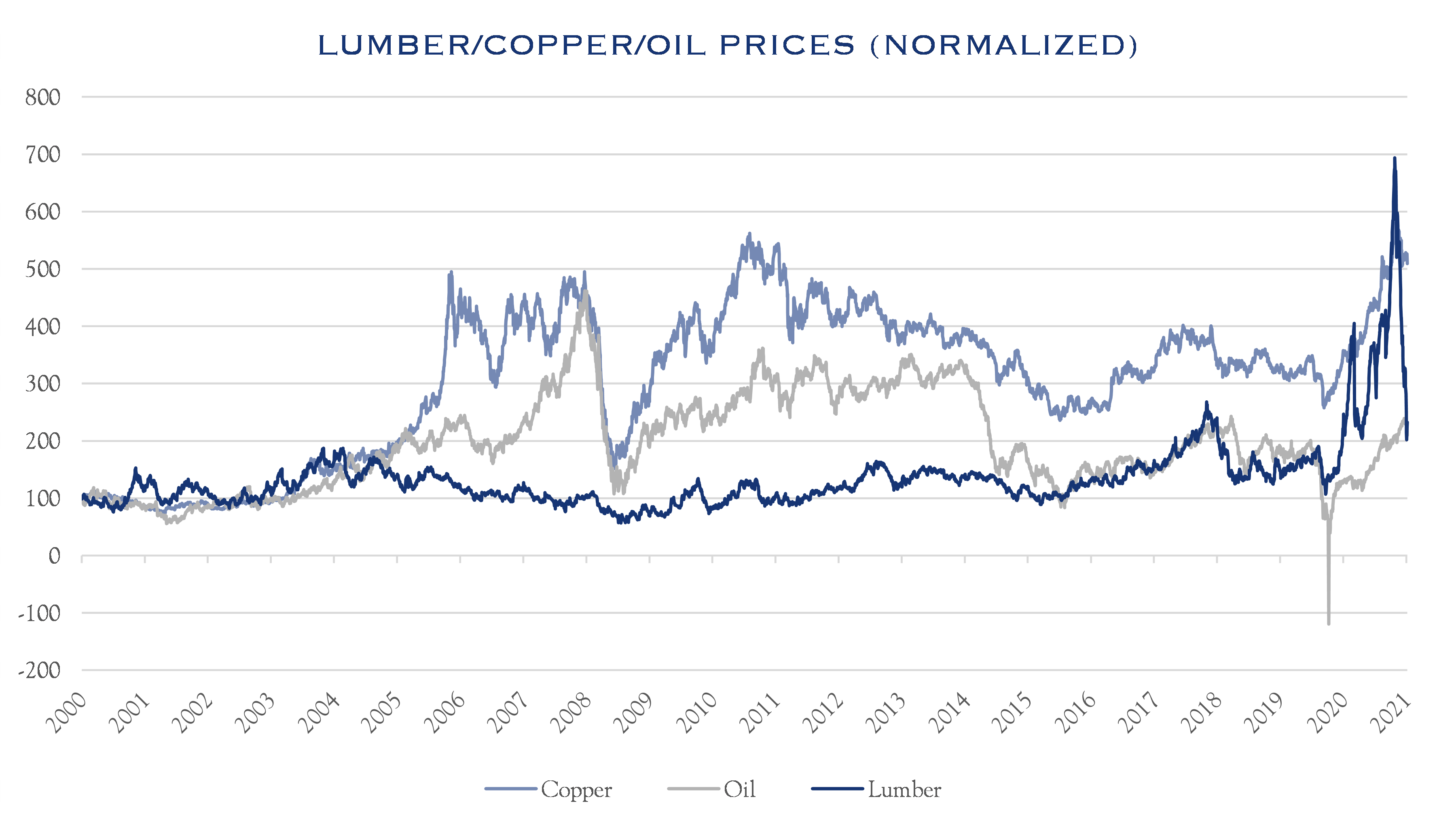 If inflation normalizes at ~2.00%—higher than the past ten years, but lower than recent readings—we expect interest rates to gradually rise to 1.75%–2.25%. Those levels are supportive of economic activity and strong valuation metrics for equities. Further, 2.00% is an important interest rate level to keep the cost of servicing the federal debt at a manageable level. At 128% Debt/GDP, the U.S. must keep a close eye on debt servicing costs. Provided that rates remain low, high levels of debt are unlikely to cause problems for investors. Nonetheless, debt is a potential constraint on responses to future economic calamities and can be a detriment to the global reserve status of the U.S. dollar. These issues will unfold over coming decades and significantly depend upon future levels of economic growth along with policy choices made in the years to come. 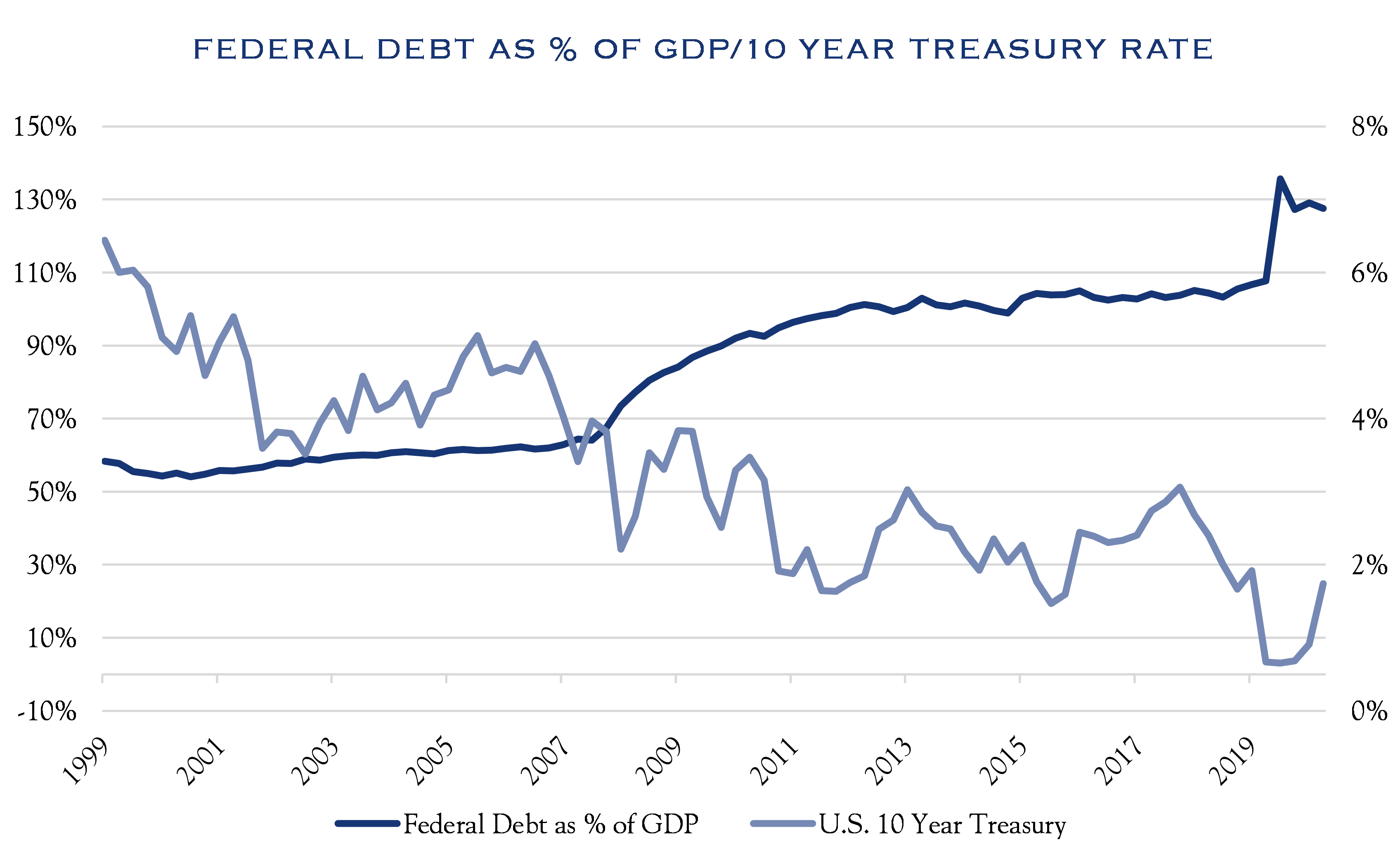 Currently, 7 million fewer people are employed (146 million) as compared to peak employment in February 2020 of 153 million. This is despite the fact that the size of the U.S. economy has largely recovered, with the U.S. Bureau of Economic Analysis reporting GDP of $22 trillion as of March 31, 2021 (eclipsing the prior high of $21 trillion before the pandemic), participation in the workforce has declined with some workers retiring earlier than planned. Other workers have been reluctant to enter the workforce due to a combination of factors including continued health concerns, difficulties with childcare/education, historically elevated stimulus, and/or career change friction. Most of these factors will resolve in coming months, though even quick job creation means a full recovery will take several quarters at best. The two-handed economist would note that on the one hand, this is frustrating, as all would like jobs to return as quickly as possible. On the other hand, there is now a high probability of job gains over an extended period of time. Markets tend to like long-term visibility, and a path forward with strong job gains over an extended period (rather than all at once) is usually preferable for equities.

The economy and the market are going through a transition, and transitions are often choppy and volatile. Looking back to the spring of 2020, we find that the stock market began to recover about one month before the economy hit bottom. Similarly, stocks rebounded to prior highs about seven months before the economy did. In other words, investors have returned to their normal behavior of looking ahead a few quarters.

This transition is especially jarring coming off a long and slow economic rebuild following the Global Financial Crisis in 2008 and the extremely rapid economic deceleration and acceleration around COVID. Transitions mark a time that is no longer part of the past and not yet part of the future. As investors, we must consider the future and our view is optimistic. We see an economy that gets back to a better version of normal.

We anticipate continued strong productivity gains due to two major forces in play. The first is the painful process of job loss and company closure that often accompanies recessions (or in this case a pandemic bust-boom cycle). That pain is typically followed by gain, as new forms of business are invented, and additional jobs are created. One statistic that has been especially encouraging is the number of new business formations. 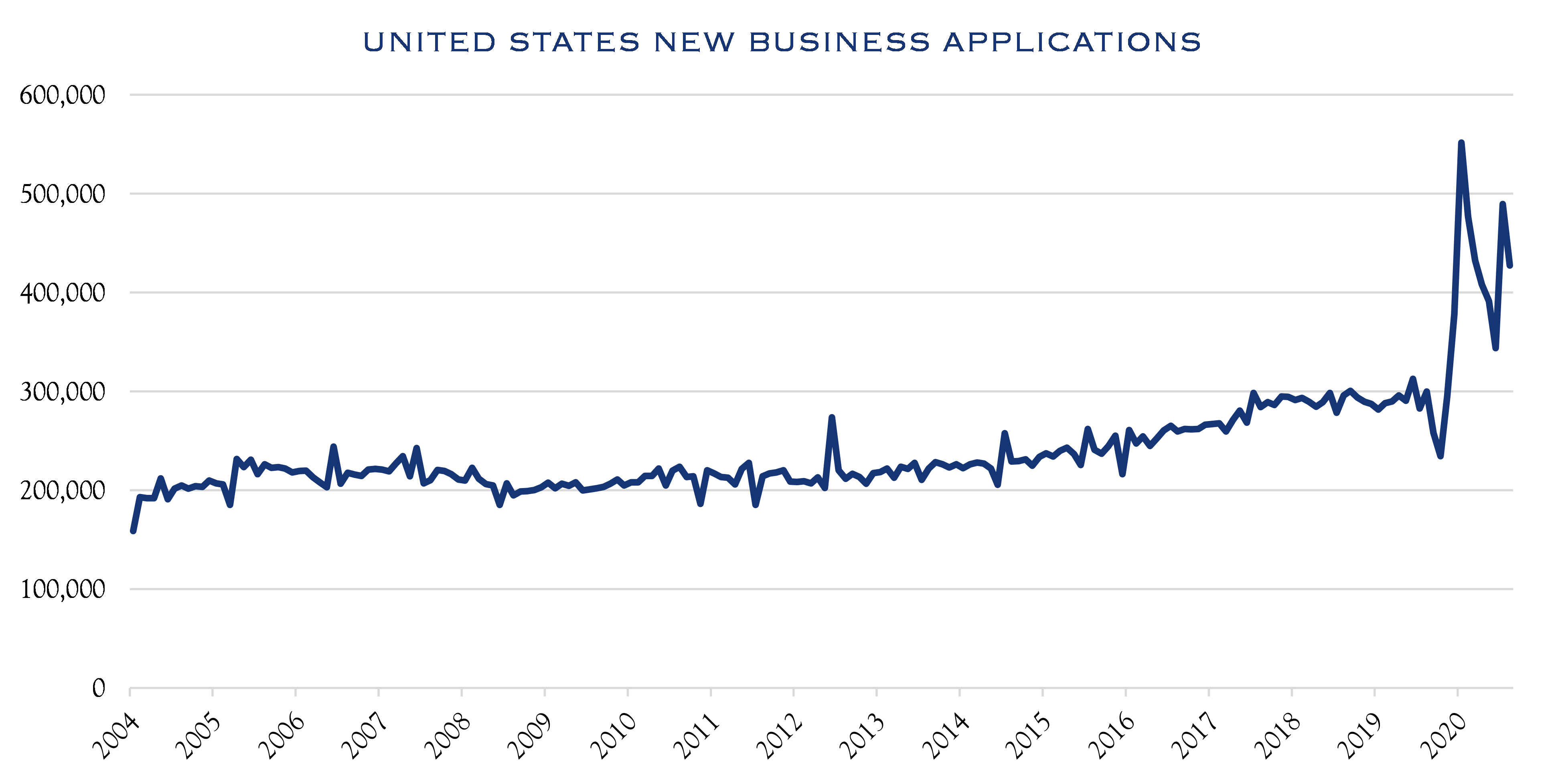 Second, the forced shutdowns of the pandemic caused businesses and individuals to re-invent their workflows. There was an abundance of investment in technology, and a focus on process improvement. As the economy has re-opened, the ability to do more with less is readily apparent in the comparison of the size of the economy to the total employed.

As businesses and workers push through this transition, they are backed by the tail end of massive stimulus as well as ample savings. Deutsche Bank reports that cash and savings have increased by an amount equal to 10% of GDP. While much of this is in higher-income groups and less likely to be quickly spent, some “excess” savings will continue to flow through to the real economy.

This combination of savings, continued job growth, economic re-invention, and productivity is likely to fuel economic growth at levels slightly above trends that were in place prior to the pandemic. Indeed, economic forecasts from the service Consensus Economics reports projected gains of 4% for 2022.

Overall, we see the most significant driver for equities being earnings growth into next year. Productivity gains, employment gains, and reversal of high savings rates will all contribute. Looking ahead over our three-year forecast horizon, it seems that at least the next 1½ years through year-end 2022 will see strong economic growth and earnings—that is a very favorable outlook for potential returns. We expect modest advances in interest rates, with the rate on the U.S. 10-year slowly grinding higher to a range of 1.75% to 2.25% from its recent range of 1.15–1.40%. Corporate balance sheets are generally sound, opening the possibility of continued buybacks and dividends as another source of support for stocks.

Maintain Balance Between Growth and Value

Due to the differences in approach to the pandemic, and the multiple company-specific actions taken or not, we believe stock selection to be an essential component of success and advocate a balance between growth and value exposures. For example, consider this quote from a soda and snacks company: “A lot of the things we did through the pandemic, continuing to invest in the business, are now paying dividends…”

Equities Outside the U.S. Will Have Some Time in the Sun

While most countries are lagging the recovery timeline of the U.S., we anticipate firms globally will see a resurgence of activity, rebounding earnings and stock performance and partially closing a longer-term valuation gap between the U.S. and foreign stocks. This metric, while distorted by the COVID cycle, has historically favored U.S. companies with higher valuations—a trend that is likely to continue, though likely at a smaller gap when non-U.S. economic recoveries begin in earnest. Considering the ample opportunities for great global companies, this recovery convergence and some diversification across different economic cycles makes a modestly sized non-U.S. allocation appealing for U.S. investors.

In an increasingly global, yet fragmented world, companies seem eager to embrace a more robust and domestic supply chain. This, paired with a push for job recovery, will benefit U.S. domestic firms that comprise small cap stocks. One caveat—there is a wide range of quality within small cap, and we encourage careful, active security selection.

Fixed Income—Protection at a Cost

Fixed income plays a valuable portfolio role in generating income and protecting against decline. This is especially true for portfolios with careful credit selection and modest interest rate risk. However, because fixed income has had such strong performance in recent years, the potential returns are near historic lows. Those lower-than-average returns are tolerable, given the need for portfolio protection and income generation.

This communication contains the personal opinions, as of the date set forth herein, about the securities, investments and/or economic subjects discussed by Mr. Teeter. No part of Mr. Teeter’s compensation was, is or will be related to any specific views contained in these materials. This communication is intended for information purposes only and does not recommend or solicit the purchase or sale of specific securities or investment services. Readers should not infer or assume that any securities, sectors or markets described were or will be profitable or are appropriate to meet the objectives, situation or needs of a particular individual or family, as the implementation of any financial strategy should only be made after consultation with your attorney, tax advisor and investment advisor. Data for illustrations were sourced from Bloomberg and Macrobond. All material presented is compiled from sources believed to be reliable, but accuracy or completeness cannot be guaranteed. © Silvercrest Asset Management Group LLC