Markets have battled a tumultuous environment, and October was no exception, with uncertainty around the looming election and increased COVID cases. The storm began to pass in early November as markets interpreted a moderate election outcome as the most favorable, and word arrived of a Phase III vaccine candidate with a claimed 90% efficacy rate.

With the election called for Joe Biden, political attention now shifts to the Senate, where two contested seats are subject to a runoff election with Senate control at stake. Overall, the election was less of a mandate and more of a moderation. Thus far, post-election, Biden has been striking a relatively modest tone, while close division in the Senate and a pickup of seats by Republicans in the House indicate that gridlock and/or bipartisanship will come to the fore.

While the political landscape is not set in stone, below is our thinking on implications for this likely divided configuration:

Fiscal Support—The lack of a strong progressive mandate, a likely lame-duck period, ongoing conservatism from Republicans, and the newly announced vaccine data create strong cross currents regarding a stimulus package. Our base case is that some limited stimulus is likely to come from Washington, consistent with the original intent of building a bridge to a post-COVID world.

Taxes—Assuming the early January Senate races in Georgia bring no major surprise, Republicans ought to maintain control of the Senate, effectively scuppering the likelihood of tax increases on corporations or personal income. This is not a certainty but remains a reasonable base case and is favorable for investors.

Regulations—A Biden administration would likely continue to apply pressure on the technology sector, along with scrutiny of financials and energy. A more moderate rather than progressive approach is likely with the prospect of a divided government and recognition that mid-term elections loom in two years’ time.

Global Trade—While a Biden administration is unlikely to avoid tension with China, any developments will probably be steady and predictable. This is a net positive for global business activity and planning of future initiatives.

Business Sentiment—Overall, business prefers some gridlock as it brings consistency and lack of aggressive government oversight. Tax increases are likely off the table, and regulatory pressures are likely to be modest rather than extreme. Consistency of approach allows for increased investment and planning—favorable scenario for business sentiment.

Market Sentiment—Markets have spoken loudly in favor of the election outcome. The market rally in early days of November was broad-based and reflective of the new political reality. Election outcomes were more moderate than expected by either side and now moderation is the name of the game—markets greatly prefer moderation over uncertainty. Moderation paired with efforts to stimulate the economy and job growth create a favorable scenario.

Economic metrics remain solid. The Institute for Supply Management (ISM) surveys of both manufacturing and non-manufacturing (services) show an expanding economy. Consumer spending as measured by bank card data as well as the Johnson Redbook review of retail sales was at or above prior year levels. Economic activity, as measured by the New York Fed’s Weekly Economic Index, indicates GDP running at a level of about 96% of 2019. The job rebound continues but will likely slow, as the most disrupted areas will heal slowly until the pandemic comes under control. 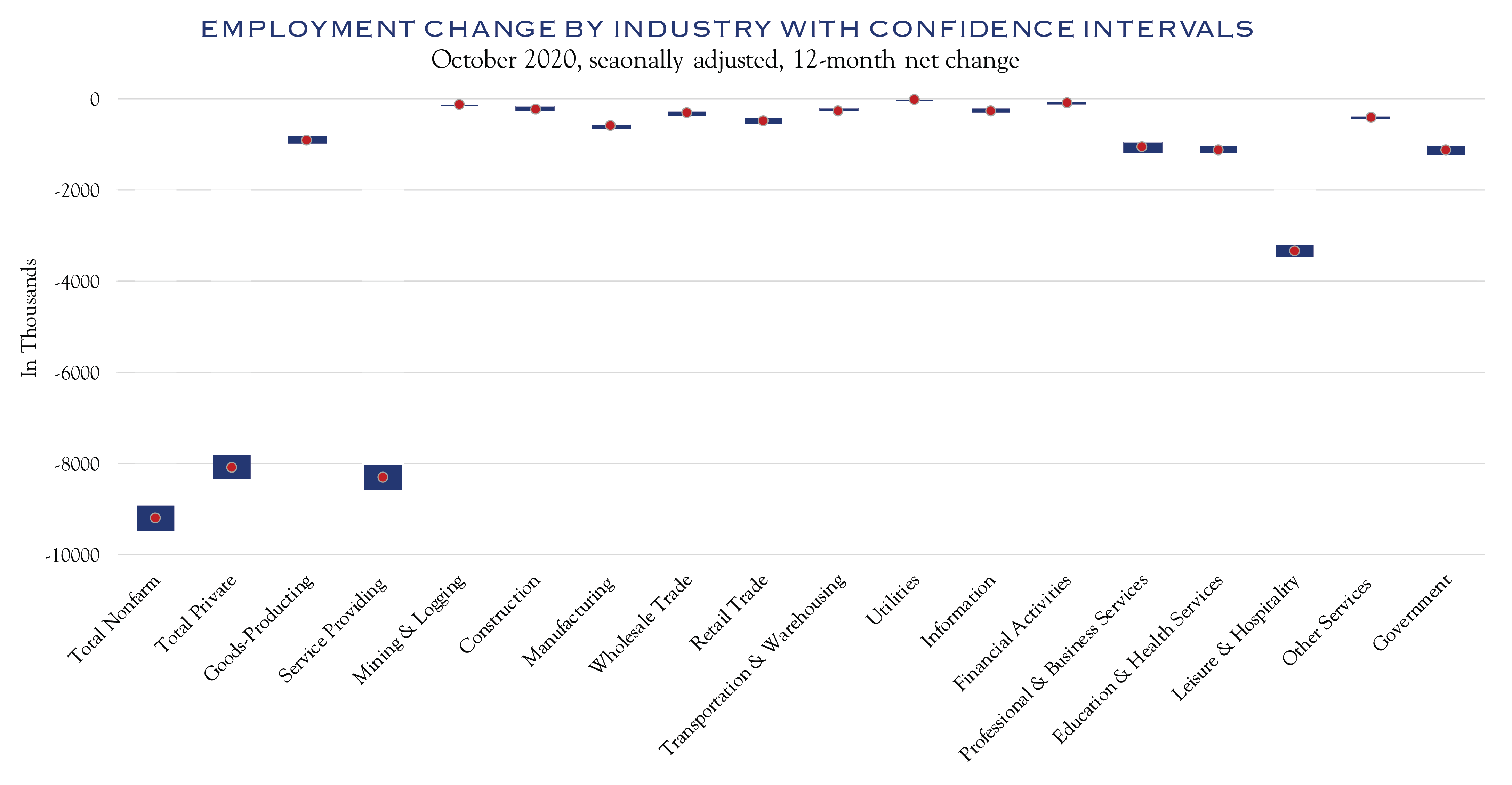 Ultimately, the economy comes back to fundamentals. While COVID remains a short-term wild card and may temporarily slow the pace of recovery, the economy will continue to grow and adapt.

This economic backdrop will power further earnings growth in 2021. When the winter wave of COVID comes under control—whether by vaccine or naturally—earnings estimates will likely increase.

Similarly, while transition plans, inaugurations and Georgia run-offs will grab attention in the short-term, sentiment is set to improve. This is typical of all presidential election years as negative campaigning dissipates.

The single largest influence on equity prices for the near term will be the path of the pandemic, which is setting a speed limit on the economy. Nonetheless, with the very encouraging vaccine news, we expect the storm to quell. As it does, not only will earnings accelerate but sentiment will improve. The outlook for next year of rising earnings estimates, improving sentiment, low interest rates, and rising valuations will continue to power stocks higher in coming months. At some point, markets will need to contend with longer-term slow global growth trends. For now, the COVID storm continues, though markets will look ahead to the expected sunnier skies of 2021.

“An Hour is a Sea”
Emily Dickinson

An Hour is a Sea
Between a few, and me —
With them would Harbor be —